If you’re hosting a party this weekend, this Loaded Potato Skins recipe is the perfect appetizer! These potato skins are baked, not fried. So they’re easy to make with minimal mess and clean-up. And when you’re planning a party it’s super convenient to bake the potato skins and cook the bacon the evening before. Just before serving, load them up and pop them under the broiler. 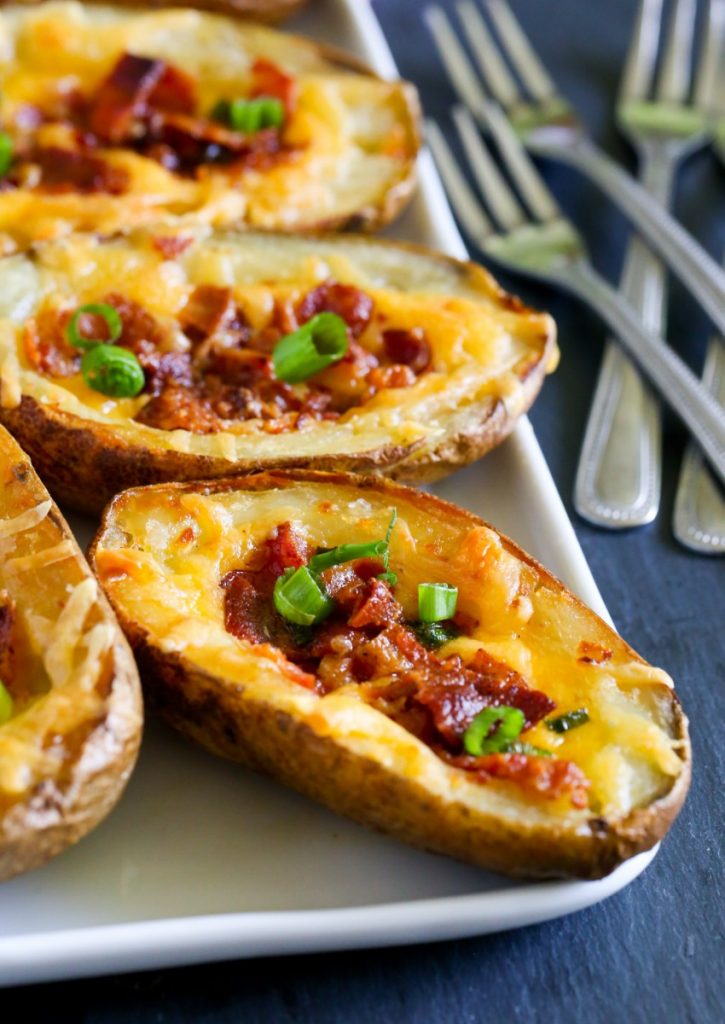 This restaurant recipe for loaded potato skins is amazing. It’s filled with hearty goodness: a crispy potato shell filled with delicious Tillamook cheddar cheese and generous sprinkles of smoked bacon. Below is a quick look at all the ingredients you’ll need to make loaded potato skins. If possible, try to select potatoes of similar size so they will all be finished baking at the same time. If you wish, you can also add ranch dressing to the ingredients list to give your guests an additional option. Which is your favorite garnish for potato skins? 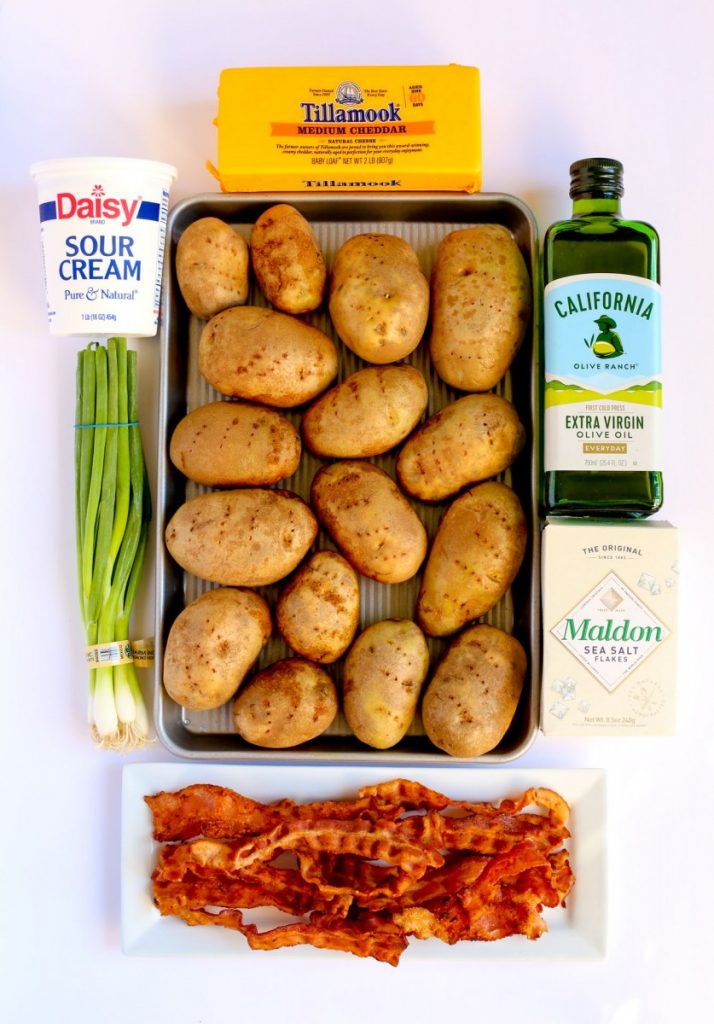 Here’s how to make loaded potato skins from scratch. To prepare the baked potato skins, remove one oven rack and put it aside. Adjust the remaining oven rack so it’s positioned in the center of the oven. Heat your oven to 400 degrees. Scrub the potatoes under running water then dry them off with a clean kitchen towel. With a fork, pierce each potato 3-4 times on each side. Place the potatoes on a baking tray and brush all sides with olive oil. Bake the potatoes for about 50 minutes or until a thin knife can be inserted all the way through the potatos without much resistance. 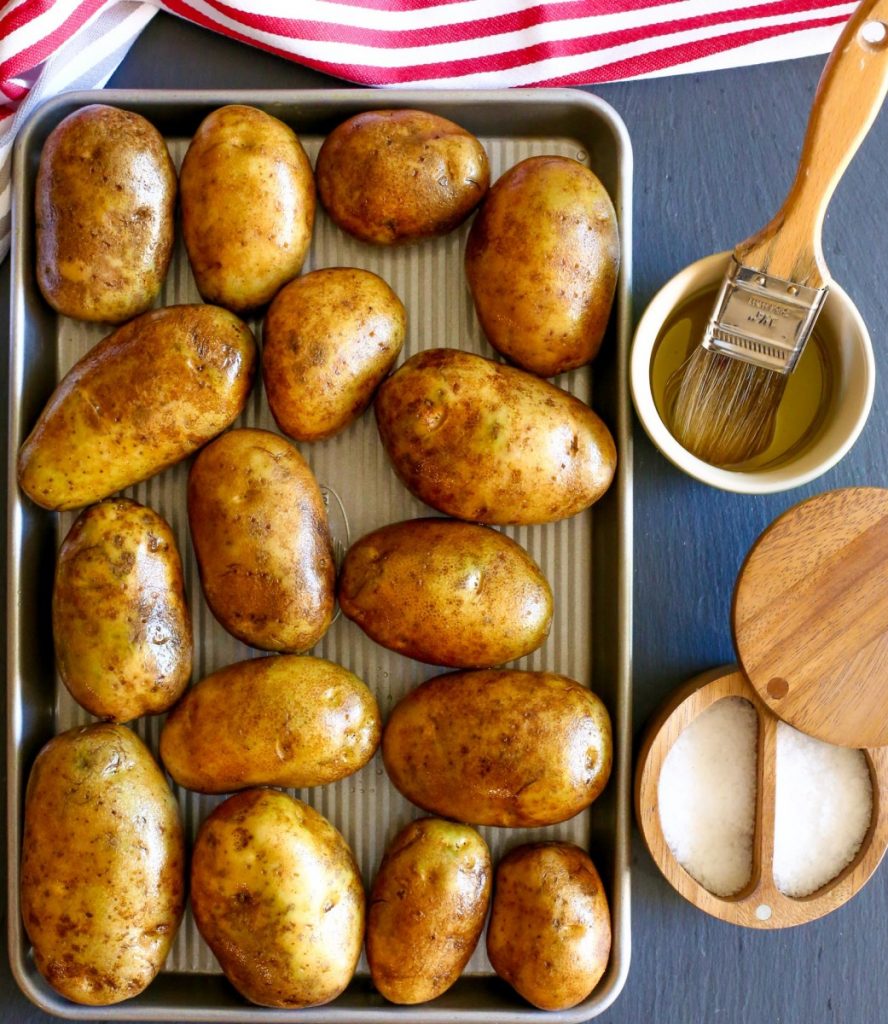 Allow the baked potatoes to cool for about 10 minutes or until they’re cool enough to handle. In the meantime, pull out a second baking tray. On a cutting board, slice each potato length-wise. Using a small cookie scoop, remove a portion of the interior from each potato half. I like leaving about 1/4 inch of the interior intact so my loaded potato skins will be nice and hearty, but you can scoop out a bit more of the inner flesh if you’d like. 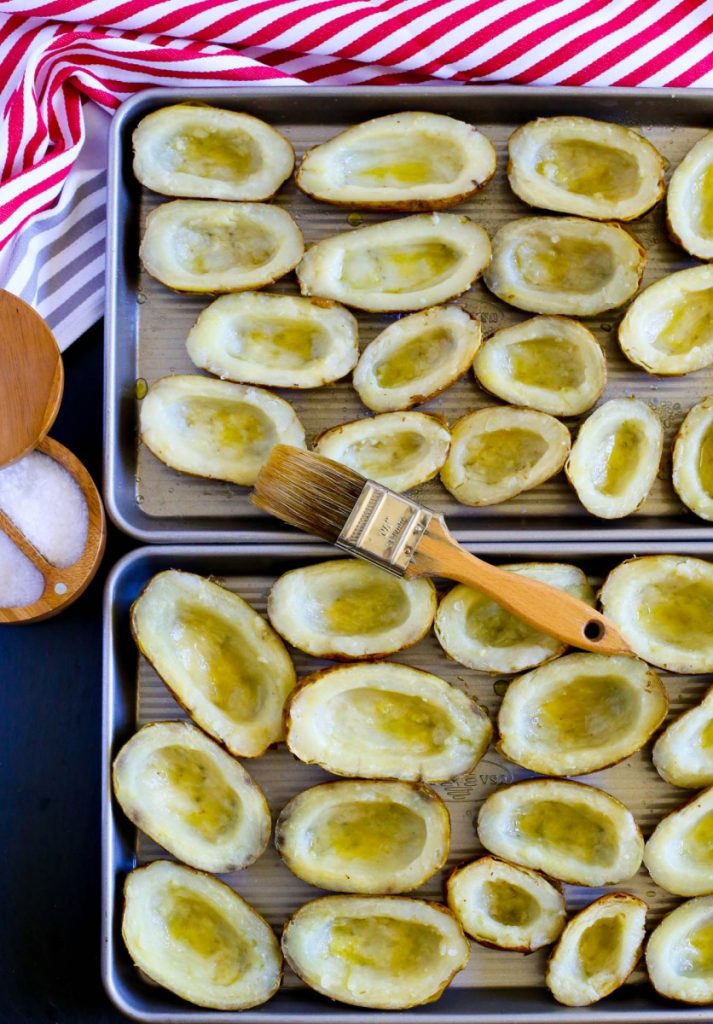 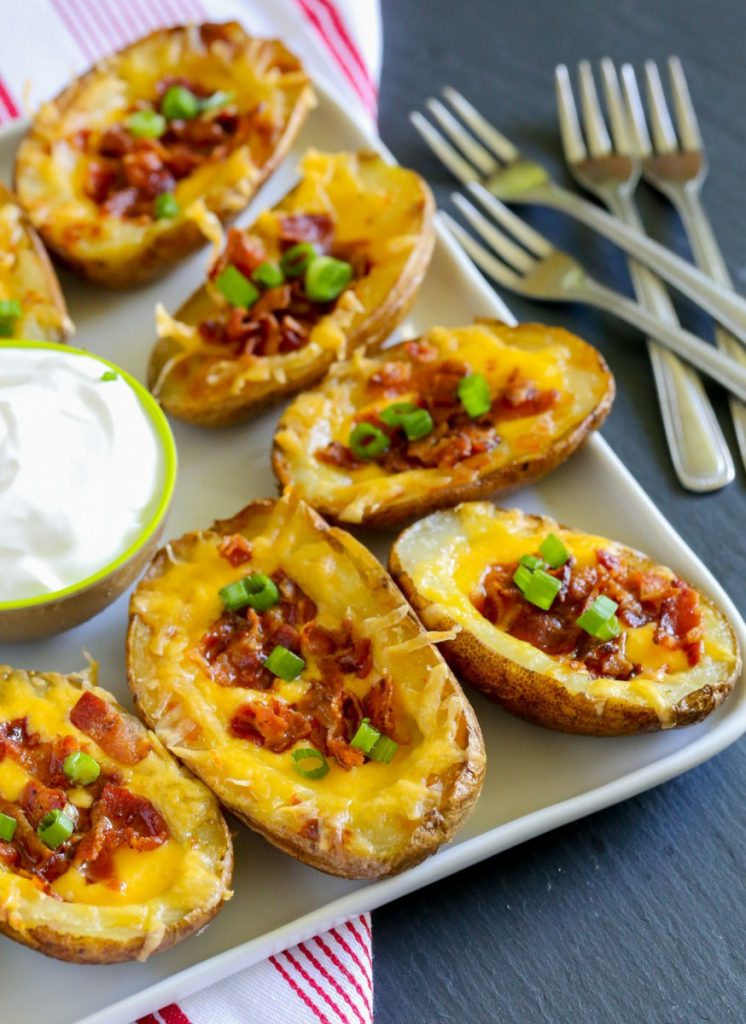 Put the trays back under the broiler just until the cheese is melted and the bacon starts to sizzle. Remove the loaded potato skins from the oven. Immediately garnish with sliced green onions. Serve hot alongside a small condiment bowl of sour cream and/or ranch dressing. Loaded potato skins are ideal for any occasion! You can make a few batches in advance and freeze them in Ziplocks. Just be sure to freeze the potato skins in flat rows with enough space in between so they don’t freeze together. 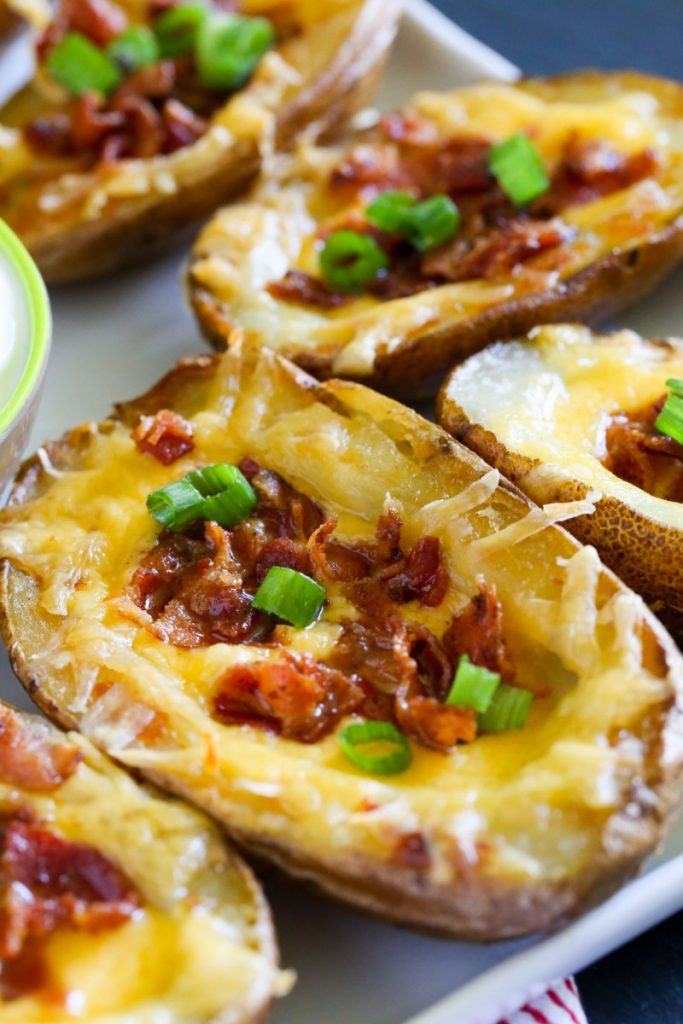 How to Make Loaded Potato Skins > Shop This Post

If you’re hosting a party this weekend, this Loaded Potato Skins recipe is the perfect appetizer! These potato skins are baked, not fried. So they’re easy to make with minimal mess and clean-up.

Save this delicious Loaded Potato Skins recipe for later. Pin it to Pinterest right now! 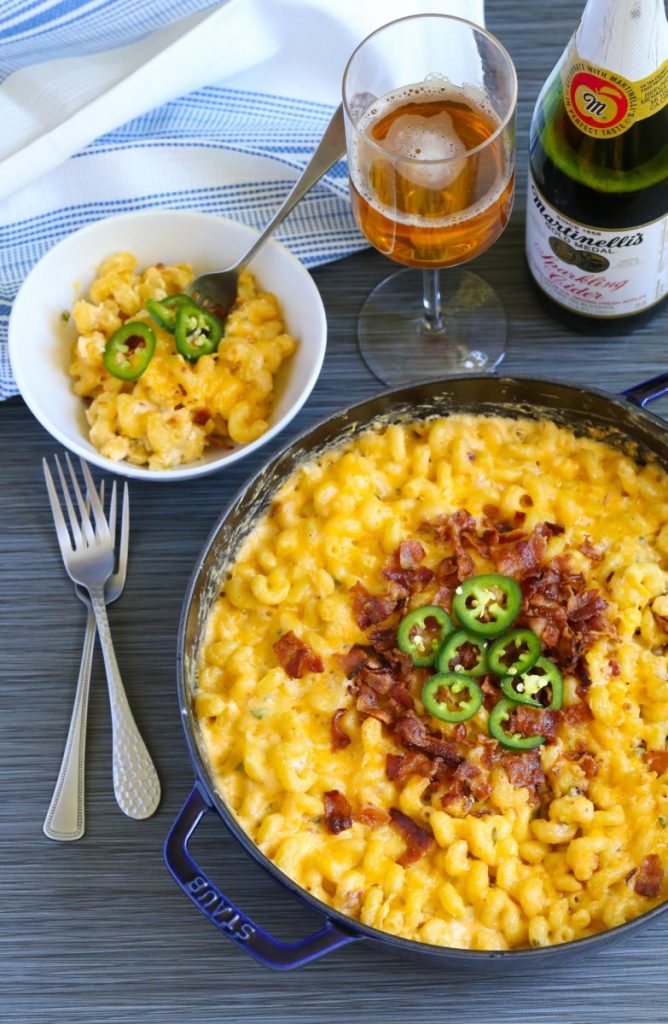 How to Make Loaded Potato Skins > Your Thoughts

Do you have a favorite go-to appetizer for parties and special occasions? What do you think about this Loaded Potato Skins recipe? Share your thoughts in the comments below. I’d love to hear from you! 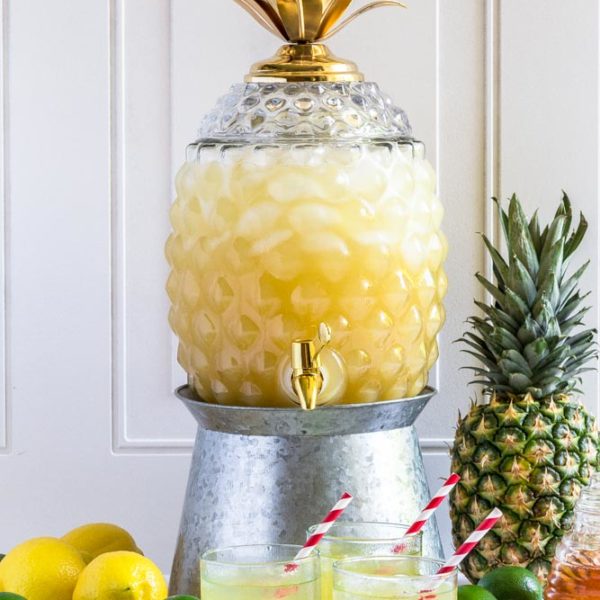 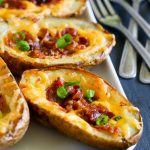